Yes, its back.  Over 1500 pipers saw this strange contraption on eBay.  One of these was sold, over a year after the eBay listing ended. It was a custom order and went for $400.00.  I took this idea on primarily as a personal challenge to see if I could build a device that would effectively break in reeds mechanically. Some of the comments I received were: “Its a great idea”, “I’d love to have one, but I can’t afford it”,  “Is this a joke?”, “Are you serious?”, “Does that thing really work?” and “Are you smoking crack?”

No, it wasn’t a joke, and yes, it really does work.  It works so well that I use it all the time to break in my own reeds.  In fact, a relatively hard reed that I haven’t played in a while can be brought in to the “medium” range by just running it in the machine for 30 minutes.  It has also been useful as a testing and pressure measuring device for some of my other products, including the Cartridge System and other products still in development.

It works by “playing” up to five reeds at a time with warm humidified air, simulating a piper’s breath.  Air is delivered from an air compressor through a precision air regulator.  The air pressure is precisely measured using a water manometer and can be controlled with the regulator. The regulated air is then diffused through a pressurized chamber of hot water for warmth and humidity. Each reed is played into a different length column of air within the main housing that approximates different notes on the bagpipe scale, and with a bit of practice, the user can distinguish which reeds are playing, which ones aren’t, and make pressure adjustments accordingly.  Reeds are played 10-15 minutes a day for a week or two until the desired blowing pressure is reached. And yes, its really, really loud even with the foam sound dampener in place. Earplugs are highly recommended.

Who would want this device? 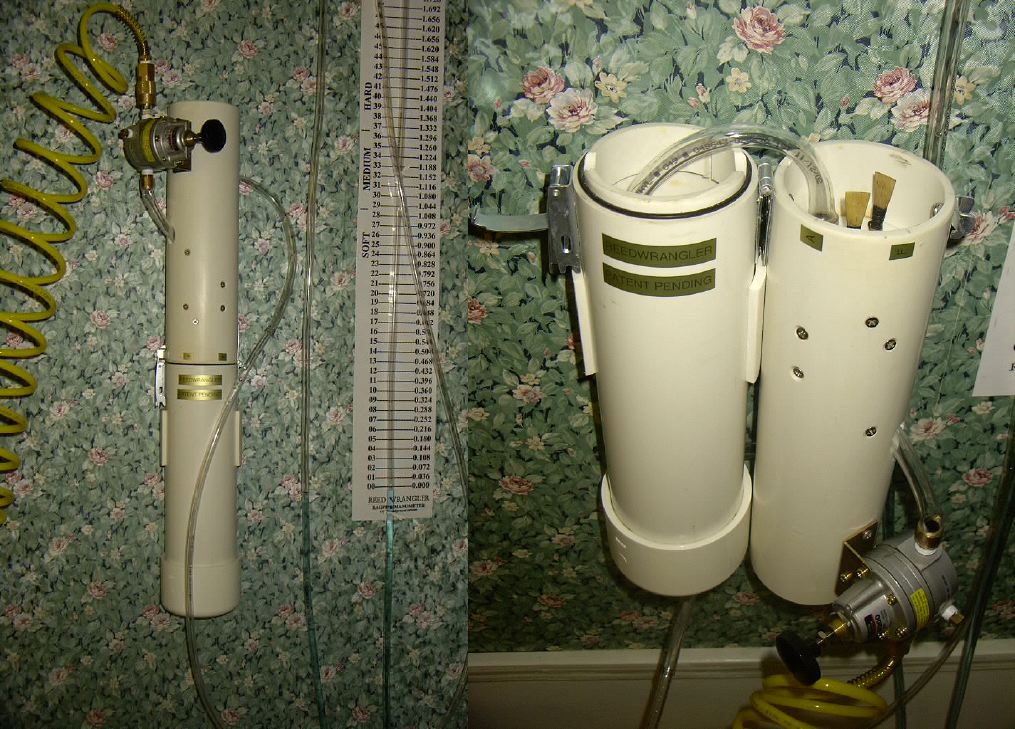 I’m not going to be making any more of these.  If you want to try to make one yourself, you can do so for about $125.00 (not including the compressor) and a lot of trial and error.  I will be happy to give you advice and tips on how to make one.  I don’t have any written plans, but I do have some provisional patent drawings that I will fax you if you’re really serious about making one.